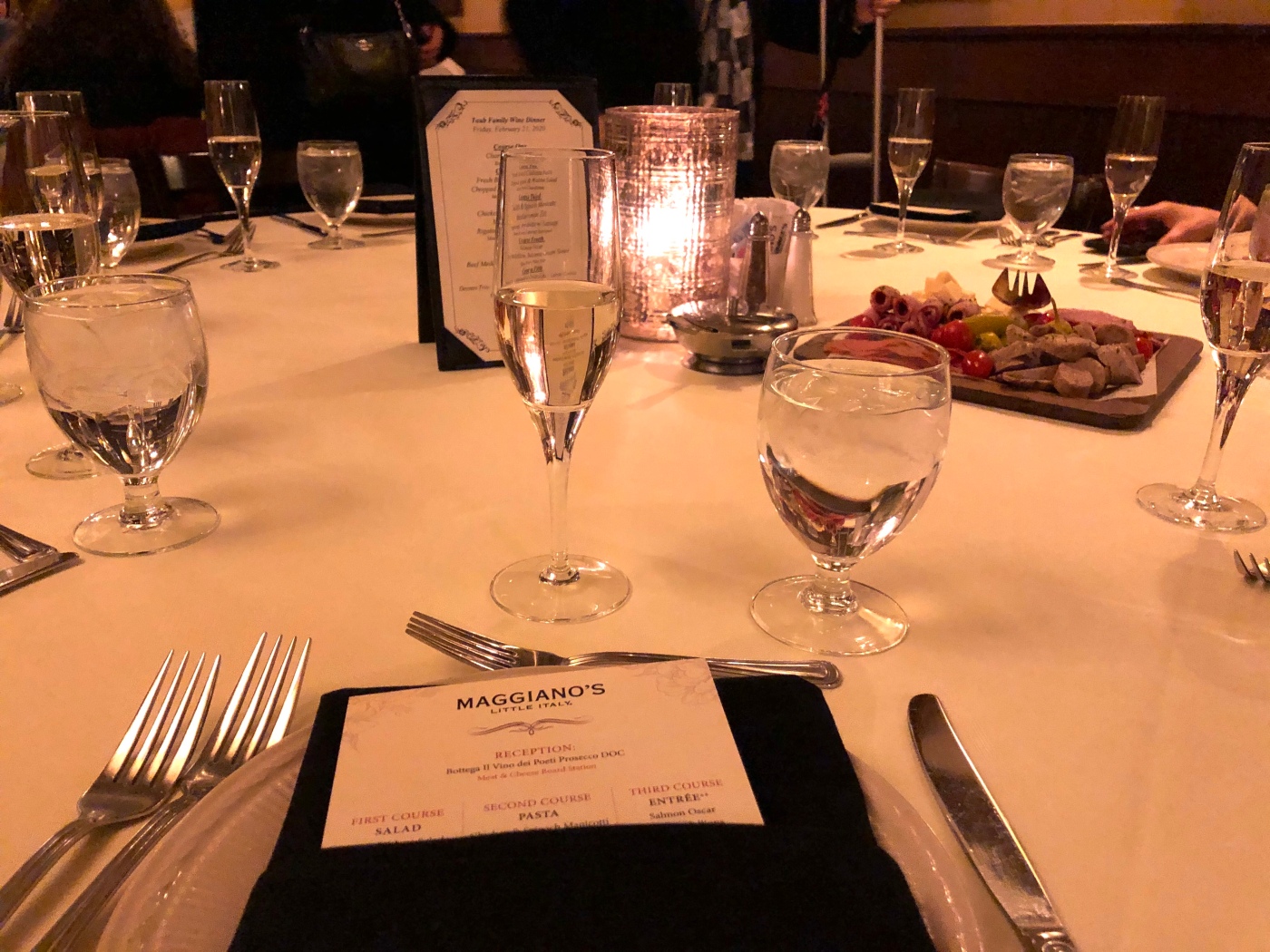 A sommelier walks into a bar, orders a four-course meal, and begins explaining the wine pairings to the bartender.

Did you find that funny? I wrote it; I’m not a comedian, so I’ll move on.

My boyfriend and I attended a wine pairing event in downtown Boston at an Italian restaurant. My decision to buy tickets for the event was impulsive, but I’m happy that I did it as this was a good experience for both of us. Upon entering the revolving doors of the restaurant, I was instructed to descend to the basement and meet the hostess. I then entered a room with a few large circular tables. There was a tray of charcuterie on each table and a glass of prosecco already poured for all participants. We were seated in a multipurpose room, the sort that has removable walls and could easily be the backdrop of a low-budget wedding or bar mitzvah. My boyfriend and I took a table in the back and we were seated with a bevy of friendly, chatty middle-aged women and one other soft-spoken gentlemen.

The event began in earnest with the sommelier standing in the front of the room holding a microphone in one and a golden bottle of prosecco in the other. He explained that the gold colored bottle kept the goodness in and the light out, preserving the sparkling quality of the bubbly beverage. The two sisters to our left were giddy even before we ingested our first glass; it was one of the sister’s birthdays and we all congratulated her. Next came the “Mon Frère Chardonnay,” which was described as a citrusy aroma with a rich, buttery taste and served with a salad. I have tried a bunch of chardonnays—many of which were cheap from Trader Joe’s—but this one stands out for its ‘elevated’ taste. The two sisters enjoyed the wine so much they somehow finagled a second glass each from the server.

The transitions between the courses were a bit slow and our talkative tablemates were loudly anticipating the next course. The second course was pasta served family style. There was a chicken dish, a sausage dish, and a Mediterranean Ziti served with a cabernet sauvignon. We were not the most coordinated bunch and ended up passing the chicken and sausage counter-clockwise and the ziti clockwise, which led to a few over/ under passes. Serving yourself family style can also be a bit awkward with a group as no one is sure how much they can politely help themselves to. We ran out of the chicken manicotti before it made a full round, yet there was plenty of sausage and ziti to spare.

The third course—and my most eagerly anticipated—was the “salmon Oscar,” which included a buttery sauce, as well as beef medallions with potatoes. The salmon Oscar was passed counter-clockwise and the beef medallions clockwise in a way that guaranteed my boyfriend and I would be served dead last. We at the table delicately took the small chunks of salmon and beef, but it was clear that we were collectively restraining ourselves. All leftover protein was snatched from the trays once everyone had a fair chance at it. This course was served with a pinot noir—which in my opinion tasted remarkably similar to the cabernet sauvignon (I have the crude palate of a budget beer drinker). Four drinks in, the table was getting rowdy. To my right sat a friendly older husband and wife. I learned that the dinner was a belated gift to the husband. Outwardly mild mannered, the wife changed her tone change at this point as she spewed profanities describing the overpaid, lazy faculty members who expect to be treated like royalty at her work. Even with her impassioned rant, the table was engaged in discussion and in good spirits.

There was a noticeable pause between the third course and dessert, which heightened our anticipation. At this point, a brunette woman at our table pointed out that there was a “Final Glass” of our choice slated for after dessert. Everyone was tipsy, yet the women were excitedly deciding whether they would go for the prosecco or chardonnay. The waiters came around during this time offering to top off our glasses with a little extra pinot noir. The birthday girl was all too eager as her wine glass was depleted and her glass of water untouched. Finally, the dessert was served with a glass of rosé. As far as rosé is concerned, this was not exactly the firework finish that one may expect with a four-course meal. The desserts comprised bite-sized portions of cheesecake, iced lemon cookies, and a sophisticated chocolate ball…thing. Everything was good, but the portions were meager. Once dessert was laid out, the servers disappeared. The brunette woman began to generate enthusiasm at the table again for the “Final Glass.” However, when a reluctant waiter showed up to our table, he was stunned to see that another drink was promised. Clearly there were some coordination issues and there were not enough gift bags at the end to go around for all participants.

I had a good experience with the dinner, and I am glad that I went. However, given the price, I feel like there were too many little missteps to make the event worth the money. First, there did not really every seem to be enough food to go around. The portions for all servings (minus the salad) were family style. This meant that some people were left out for certain dishes and those of us with dietary restrictions could only participate in a third or half of some of the courses. Second, there were a few errors on the menu, including the biggest blunder—promising one more drink than what was offered. Lastly, there were not enough gift bags to go around, which may sound trivial, but when you pay for an experience, it feels bad if you are excluded from the whole package.

On a whole—for a first-timer, I enjoyed the novelty of a group wine pairing. I am sure that my tablemates had a good time too, that is if speaking louder and louder throughout the dinner is any indicator of increased pleasure. I guess with five glasses of wine, it’s hard not to be loud and happy.